Award to them. A.N. Grechukhina 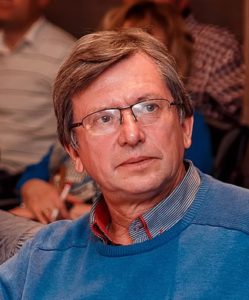 The Organizing Committee of the Scientific and Practical Conference “Veterinary Medicine in Pig Breeding” decided to establish the Award named after. A.N. Grechukhin, which will be awarded for the best report at the conference.

On May 23, 2018, when we gathered at the VII Scientific and Practical Conference “Veterinary Medicine in Pig Breeding” and expected Alexander Nikolaevich to participate in it, the sad news of his death came. This is a very big loss. Alexander Nikolayevich was a colleague, friend, a person who in recent years has helped veterinarians in difficult situations. Probably, there is no such large pig farm, wherever he comes, wherever he does not help doctors solve urgent issues related to both infectious pathology and general nature in the field of enterprise management. Doctors loved him, always accepted with pleasure. In the case of comments to the farms from the supervisory authorities, Alexander Nikolayevich helped the doctors not only to improve the situation, but also to show their professional competencies. With its loss, a large void has formed in Russian veterinary medicine, which so far no one can fill.

A year later, on May 23, 2019, during the second day of the VIII conference “Veterinary Medicine in Pig Breeding”, the lights suddenly went out in the premises where the conference was held. It happened as a result of lightning, which hit the transformer box – there was a strong thunderstorm. We decided that this was a signal for us to honor the memory of Alexander Nikolaevich, and, in our opinion, this can be best done by continuing his work: encouraging a professional, deep approach to the work of a veterinarian.

Dear Colleagues! We are glad to see doctors at our conference who not only carefully follow the instructions, but also treat their work with soul: they develop veterinary science, use their powers of observation, an inquisitive mind, and take care of the health of animals. Starting next year, the award to them. A.N. Grechukhin will be awarded to the conference participants who submitted a report based on their observations, developments, and the use of their own methods.

The criteria for awarding the Award include:

Registration of participants Ask a question to the organizing committee
×
×